The head of the Grand Mosque of Algiers condemned coordinated suicide bombings in Algeria that killed 33 people, cause it does't represent Muslim values. 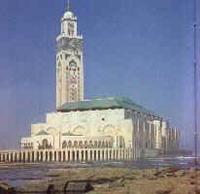 Cheikh Ali Sediki said Wednesday's attacks - on the prime minister's office and a suburban police station - "bring only bad things on Algeria and Islam" and called on Algerians to come together to turn the page on an Islamic insurgency that peaked in the 1990s.

"We forcefully condemn the barbaric explosions that shed the blood of innocents and that we consider an attack against the Muslim people of Algeria," he said, speaking before the traditional Friday prayer.

The imam called the attackers youths "who do not understand true Islam."

Al-Qaida in Islamic North Africa claimed responsibility for the attacks. The group was built on the foundations of the Algerian insurgency group that fought to try to topple the nation's secular government.

The insurgency broke out in 1992, and over the years an estimated 200,000 people - including militants, security forces and civilians - were killed. Until recently, attacks had been waning.