Anna Nicole Smith's mother and former boyfriend were in last-minute negotiations to avert a showdown over custody. 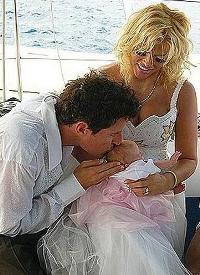 Lawyers for ex-boyfriend Larry Birkhead, the baby's father, and Virgie Arthur were expected to meet in private in the Bahamas to discuss a visitation arrangement, said Debra Rose, an attorney for Smith's mother.

Rose said Arthur, who was estranged from her celebrity daughter collapsed when she died in February, will continue her legal bid for joint custody of the infant, Dannielynn, if the talks fail.

A Bahamian court was scheduled to hold a closed hearing Friday on the matter.

"We intend to proceed on that application unless something else comes along that causes us not to have to take that course of action," she said.

On Tuesday, a DNA expert revealed that Birkhead, a California photographer, was the father of Dannielynn, who could inherit a fortune. Following that revelation, Smith's companion, Howard K. Stern, said he would not fight to keep custody of the girl.

Stern, who has been caring for Dannielynn in the oceanfront home that he and Smith shared before her death, has said he believes Birkhead should get full custody of the child.

Arthur said she would like access to her granddaughter and believes an agreement with Birkhead is possible. "I hope so," she said. "Larry's a good guy."

Arthur and her attorney spoke outside a hearing on a legal challenge filed by Stern that halted the inquest into the Sept. 10 death of Smith's 20-year-old son Daniel in the Bahamas from a drug overdose.

Stern has challenged a decision not to allow a questionnaire to gauge any bias among potential jurors. It was unclear when the court would rule on the issue.