The governor of Kansas signed a law barring protesters from funerals trying to curtail a fundamentalist church that pickets military funerals, claiming the deaths are God's punishment for homosexuality. 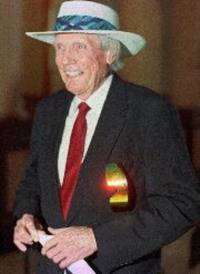 However, the legislation has the legal novelty of not taking effect until the Kansas Supreme Court or a federal court upholds it as constitutional.

Legislators added that provision to lessen concerns that the Rev. Fred Phelps and his followers would file a legal challenge, win and collect attorney fees from the state.

"It's disgraceful for anyone to try and disrupt a funeral," Gov. Kathleen Sebelius said during a Statehouse ceremony. "It is unfortunate this reprehensible practice has been exported to other states."

The members of Westboro Baptist Church, a small fundamentalist congregation in Topeka, picket burials of U.S. troops killed in combat. They say those deaths are God's punishment for a nation that harbors homosexuals, and maintain that their protests are a form of religious expression protected by the U.S. Constitution.

Phelps and his followers have conducted anti-homosexual protests since 1991 but gained national attention and generated outrage throughout the United States when they started showing up at funerals for troops killed in Iraq and Afghanistan.

At least 32 states have enacted laws restricting funeral protests, according to the National Conference of State Legislatures.

The new Kansas law says protesters cannot be within 150 feet (46 meters) of a funeral one hour before, during or two hours after the end of the service. Violators would face up to a $1,000 (743 EUR) fine and six months in jail. Sebelius said she's confident the law will withstand court scrutiny.

But Shirley Phelps-Roper, the church's attorney, called the new law "absolutely worthless." She said the group has protested about 260 funerals in the past 21 months in 42 states.

"Their law fell so painfully short of hitting any mark. It accomplishes exactly nothing," said Phelps-Roper, who is Fred Phelps' daughter.

"We are always more than 300 feet (91 meters) from the funeral site and always leave before the funeral starts," said Phelps-Roper. "There is nothing about the law that has anything to do with us."

The legislation also makes it unlawful to obstruct any public street or sidewalk and allows family members to sue if they feel protesters defamed the deceased - an exception to the general rule of law that one cannot libel or slander the dead.

At the bill's signing, Sebelius was surrounded by about 50 members of the Patriot Guard, clad in black leather. The group of motorcyclists demonstrate against Phelps and his church, forming a human shield between families and picketers.