Italian movie director Marco Bellocchio is making a movie about a little-known chapter in the life of Fascist dictator Benito Mussolini - the story of a son he kept hidden in mental asylums until his early death. 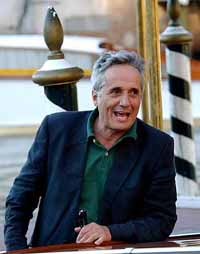 Benito Albino Mussolini was born in 1915 before his father's rise to power and died mysteriously at age 27 in a mental asylum near Milan, three years before the dictator's execution. His mother Ida Dalser, an Austro-Hungarian beautician and nurse, was also confined in asylums near Trento and Venice, where she reportedly died in 1937.

The tale of isolation and abuse has been known to historians but largely ignored by mainstream culture. Bellocchio said he was inspired by two recent books and a documentary on the subject.

"This is the tragic story of a mother and a son, confined and dying in mental asylums," Bellocchio told The Associated Press in an interview at his studio in Rome.

There is no dispute about Benito Albino Mussolini's parentage, although it remains unclear if Mussolini ever married the boy's mother. The son became a sailor, but the Fascist regime later confined him and Dalser in at least three mental asylums where they died of still unknown causes.

Bellocchio said historical details about the long-hidden relationship are scarce because Fascist militias destroyed most of the relevant documentation.

As a result, Bellocchio, who is in the final script stages, said the film "Vincere" ("To Win") will be largely fictionalized though based on real events.

"Ida was very feisty and persistent, and somehow invincible," Bellocchio said. "She continued to protest and rebel and not accept the role of the abandoned woman."

Casting and shooting locations have not yet been determined, but Bellocchio suggested the actors would be mostly Italians.

Marco Zeni, the author of one of the books that inspired Bellocchio's project, said Mussolini deliberately planned to isolate his hidden offspring and wanted to do away with a relationship of which his family disapproved.

"The abuses were endless for both of them. They were detained and persecuted, and kept isolated from the rest of the Mussolini family, although they never showed any sign of mental illness," said Zeni, who collected letters and certificates on the case and published them in recent years.

In the same year as Benito Albino's birth, Mussolini married Rachele Guidi, a family friend, in a civil ceremony and together they had three sons and two daughters. Historians say it is widely known that the dictator had many affairs. He was shot by partisans in 1945 with his mistress, Claretta Petacci, as they were trying to flee Italy.

"This wasn't just one of the many affairs that Mussolini had, but an important and tragic event," in his life, Zeni said of Dalser's case. "The film will hopefully give historical visibility to an otherwise forgotten tale."