"The Magic Flute" by Viewing William Kentridge is like contemplating a great painting: You watch and think, and then hours later you still dwell on the experience and ponder it some more. 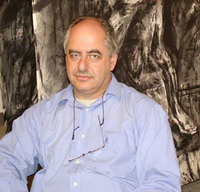 And no wonder: The director is a famous artist from South Africa, known for his charcoal drawings and animated films.

His 2005 staging of the Mozart masterpiece at Brussels' Theatre Royal de la Monnaie, given its North American premiere Monday night at the Brooklyn Academy of Music's Gilman Opera House, is the antithesis of many productions of "Die Zauberfloete". There are no animals roaming the stage. Instead of wearing a bright bird costume, Papageno looks like a colonial tourist. The Queen of the Night hasn't morphed into a Disney-like villain.

Kentridge creates his own brand of theatrical magic by turning the stage into an oversized Etch A Sketch, with white lines projected onto flat scenery, forming geometrical shapes, animals, galactic star bursts - even a guillotine and gallows, which appears in stages, as if in a hangman game. There are photo and video projections of Egyptian and Masonic imagery, such as an eye and a pyramid, and the murder of a rhinoceros.

Leave the kids at home. This "Magic Flute" is for adults, a staging as much a work of art as the opera itself.

The simple set, designed by Kentridge and Sabine Theunissen, has six stepped-up levels of trompe l'oeil border and backcloths and emulates the inside of a Bellows camera, and Kentridge uses the darkness of a camera chamber as a metaphor for a stage where the competition between Sarastro's lightness and the Queen's darkness takes place. His conception evolves from a film negative: A hand in front of the camera creates a shadow that serves as a serpent. When a wine glass or lion is needed, a projection or video pops up.

Characters are dressed by Greta Goiris as if they were on a late 19th-century expedition. Kentridge establishes the time, writing that Sarastro's brotherhood is akin to a "Royal Geographic Society" open only to men, with the Queen and the Three Ladies similar to suffragettes.

Pamina wears a simple pink dress and the Queen a white gown. Papageno has a cutaway and Tamino looks like he's out on a hunt. Monastatos, topped by a fez, looks like a hotel bellman, and Sarastro is a dandy in an ascot. Papagena, making her second entrance perched on a chalkboard pushed by the Three Boys, has a two-tone green gown with bodice and pouty skirt.

South African bass Kaiser N'Kosi (Sarastro) was the most impressive of the singers, with a dark mellifluous voice. Sophie Karthaeuser was endearing as Pamina, and while Milagros Poblador hit the Queen's Fs, she let several notes en route go astray. Stephan Loges' Papageno was constrained by the directing to the point of blandness, especially in the first act.

Rene Jacobs conducted the original run and Piers Maxim, an assistant to Jacobs, was on the podium in New York. He led the Monnaie orchestra in a languid performance that included some unique bridge music from a piano. The sound was more spare than usual, and the narrowness of the orchestra pit created a closeness to the audience in the 2,100-seat auditorium, where three more performances are scheduled through Saturday.

Jennifer Tipton designed the lighting, which interacted with all the projections and bathes the set in gray and a dark blueish-green. The final image, Tamino and Pamina silhouetted together at the top of the steps near the back of the stage, was one to remember.

Kentridge received the loudest ovation during curtain calls. He is to direct "The Nose" at the Metropolitan Opera in 2010, and Met general manager Peter Gelb, whose office is adorned by Kentridge prints, had an aisle seat in the orchestra. It should be fascinating to see what Kentridge does with Shostakovich's absurdist work.