Students at the University of Pennsylvania eager to continue a tradition of pelting fellow undergraduates with flour, eggs, ketchup and mustard. 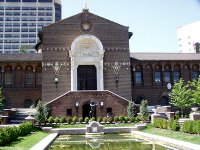 The change is part of a compromise agreed to by Penn officials and students participating in "Hey Day," a decades-old rite of passage that administrators at the Ivy League college had threatened to curtail or abolish because of fears it jeopardized student safety.

Hey Day, which began as "Moving-Up Day" in 1916, is the day when third-year students officially enter their final year of school. Slated for April 20 this year, hundreds of third year Penn students plan to continue the tradition of sporting red T-shirts, canes and plastic foam hats as they picnic and then walk to College Hall for the declaration.

A more recent development finds students in their last year pelting them with condiments and other objects even whole fish along the way.

Last year, a university official told the student newspaper, The Daily Pennsylvanian, that many third-year students did not participate in Hey Day for fear of being splattered with foodstuff. The event was threatened with cancellation.

After lengthy negotiations this year, administrators and students agreed to give seniors "safe and celebratory items" to throw likely marshmallows and streamers and to ask them to sign "responsibility pledges" to ensure the festivities do not get out of hand.

"The plan that we have put forth balances the expressed desires of students with the paramount need for Penn traditions to be safe," Valarie Swain-Cade McCoullum, vice provost for university life, said in a statement.