After violent protests from high school students president Michelle Bachelet presented a bill to standardize the quality of education throughout Chile. 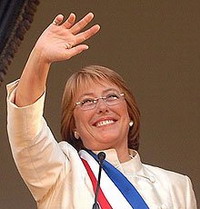 Students objected to inequities in education that developed under a law dating from Gen. Augusto Pinochet's 1973-90 regime that transferred responsibility for public education from the central government to municipalities, leading to steep differences between schools in poor and rich areas.

Under the proposed bill, public and private schools that receive funds from municipalities or the Education Ministry would have to reinvest any profits into the schools. Municipalities would retain responsibility for their public schools, and would receive additional funds as needed.

"This is the foundation of a new architecture for Chile's education," Bachelet said as she endorsed the bill Monday at a presidential palace ceremony attended by student protest leaders. "This bill seeks to give democratic validity to a law that regulates one of the most important aspects in human activity."

Students began protesting for several education changes last May, shortly after Bachelet was sworn in as Chile's first female president. At the peak of the protests, as many as 700,000 students took to the streets in demonstrations that often turned violent. Three protests since then have been smaller but also violent.

"Our effort has finally been effective," student leader Maria Jesus Sanhueza said. "But we have yet to analyze the proposal in details."

A full text of the bill was not immediately made available to the public.