Anna Nicole Smith's partner has hired a prominent Atlanta attorney to represent him in possible litigation against media companies that falsely implicate him in the death of former Playboy Playmate and her son. 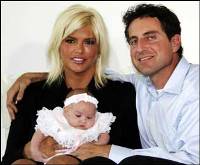 Lin Wood said he had been retained by Howard K. Stern, who is one of three men claiming to be the father of the starlet's infant daughter.

Wood, who has handled a number of high profile cases  including representing the family of slain child beauty queen JonBenet Ramsey made the announcement in a statement released Monday, saying he was retained after meetings over the weekend in the Bahamas, where Smith and Stern lived as a couple before her death in February.

"My representation of Mr. Stern will focus on those individuals and entities guilty of making false accusations of criminal conduct against him related to the tragic deaths of Anna Nicole Smith and her son, Daniel," Wood said in the release.

"Mr. Stern is an innocent individual who has never been charged with any crime but finds himself on trial in the media. The nightly television, tabloid and Internet trial of Mr. Stern in the court of public opinion based on sensational lies, speculation, rumor and gossip is over."

Stern, who was Smith's companion at the time of her death, is listed on Dannielynn's birth certificate as her father. But two other men Smith's former boyfriend Larry Birkhead and Frederic Von Anhalt, Zsa Zsa Gabor's husband, also claim to have fathered the infant.