Johnny Hart, a famous cartoonist, whose award-winning "B.C." comic strip appeared in more than 1,300 newspapers worldwide, died at his New York state home on Saturday. He was 76. 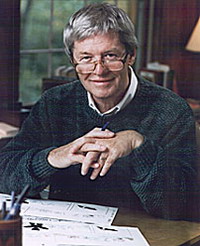 "He had a stroke," Hart's wife, Bobby, said on Sunday. "He died at his storyboard."

"B.C.," populated by prehistoric cavemen and dinosaurs, was launched in 1958 and eventually appeared in more than 1,300 newspapers with an audience of 100 million, according to Creators Syndicate Inc., which distributes it.

After he graduated from Union-Endicott High School, Hart met Brant Parker, a young cartoonist who became a prime influence and co-creator with Hart of the "Wizard of Id" comic strip.

Hart enlisted in the Air Force and began producing cartoons for Pacific Stars and Stripes military newspaper. He sold his first freelance cartoon to the Saturday Evening Post magazine after his discharge from the military in 1954.

Later in his career, some of Hart's cartoons had religious themes, a reflection of his own Christian faith. That sometimes led to controversy.

A strip published on Easter Sunday in 2001 drew protests from Jewish groups and led several newspapers to drop the strip. The cartoon depicted a menorah transforming into a cross, with accompanying text quoting some of Jesus Christ's dying words. Critics said it implied that Christianity supersedes Judaism.

Hart said he intended as a tribute to both faiths.

Besides his wife, Hart is survived by two daughters, Patti and Perri. He was a native of Endicott, about 135 miles (220 kilometers) northwest of New York City, and drew his comic strip at a studio in his home there until the day he died.

Funeral arrangements had not been announced.