Kevin Spacey takes on Eugene O'Neill's 'A Moon for the Misbegotten'

The first preview begins in three days, and Broadway's Brooks Atkinson Theatre is in full traffic mode. Stagehands, dressers, the house electrician, a company manager, even a press agent or two crisscross the ancient backstage confines of the Atkinson, the shabby part of the theater an audience never sees. 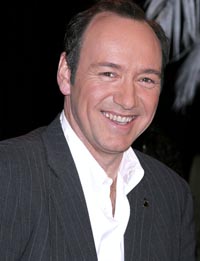 Kevin Spacey takes on Eugene O'Neill's 'A Moon for the Misbegotten'

Climb the stairs on the other side of the stage and you come to a nondescript dressing room, currently bare except for its occupant and his small black dog, a 9-year-old female of uncertain parentage. She's called Mini  named after the automobile, the Mini Cooper.

As Mini, sporting a maroon sweater with a yellow border (well, the dressing room is a bit chilly) intently watches her master, Kevin Spacey sips coffee and expounds on his favorite topic: the Old Vic, the legendary London theater where the likes of Olivier, Richardson, Gielgud and Redgrave once performed and which he now runs.

Spacey is back in New York to appear in a revival of Eugene O'Neill's "A Moon for the Misbegotten," a hit at the Old Vic earlier in the season. The production has arrived with two of Spacey's co-stars, Eve Best and Colm Meaney, and an armful of rave reviews. It's a chance for the actor to show off what the Old Vic can do as well as give audiences another look at one of O'Neill's greatest plays.

"O'Neill writes characters without judgment ... which is a pretty amazing achievement," the actor says. "Very often, we feel the writer's voice making a commentary on a character's morality or choices or faults."

"O'Neill just says, `You make up your mind ... about these people.' I feel, even though his characters are living denials and lies and contradictions, they are, at the core, very honest people."

In "Moon," Spacey portrays James Tyrone Jr., a wasted, despairing actor who is a stand-in for O'Neill himself. On a moon-dappled night, Tyrone finds redemption, or at least solace, with Josie Hogan, a big, coarse farm woman played by Best.

The play was never considered in the top tier of O'Neill's works until the revelatory 1973 revival starring Jason Robards and Colleen Dewhurst. Since then, Broadway has seen two other productions - one with Ian Bannen and Kate Nelligan in 1984 and another with Gabriel Byrne and Cherry Jones in 2000.

For Spacey, the Atkinson has a special resonance. Twenty-five years ago, he made his Broadway debut in this theater, playing Liv Ullmann's son in a revival of Ibsen's "Ghosts." In 1999, he returned there to portray Hickey in an acclaimed production of O'Neill's "The Iceman Cometh," directed by Howard Davies, who is back to direct this version of "Moon."

Their relationship has made for an exceptionally smooth rehearsal period, according to Meaney, who plays Josie's wily, cantankerous father, Phil Hogan, in the current revival.

Spacey and Davies "knew each other's habits and trusted each other very much," Meaney explains. "You weren't coming into a situation where there was any conflict or disagreement between actor and director.

"Besides, Kevin is a joy to work with on stage. He's got great energy. He's incredibly inventive. But also there's a great sense of ease about his acting. It's great to be on stage with that because it sets everybody else on stage at ease as well."

Spacey has seen both the two most recent revivals of "Moon" on Broadway. Yet he specifically avoided watching a filmed version of the Robards-Dewhurst production "just out of absolute terror that I would steal everything I saw because Jason was not just a great and extraordinary O'Neill interpreter, but he also became a friend - and I'm prone to impressions."

In a bit of eerie symmetry, Spacey is now sort of an actor-manager, not like O'Neill's own father, the great 19th-century actor James O'Neill, who perennially toured the country in "The Count of Monte Cristo."

"Only I am choosing better plays," Spacey says as a slight smile crosses his lips.