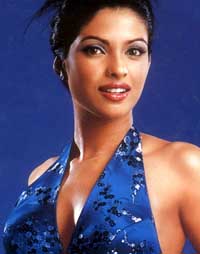 Bollywood beauty Priyanka Chopra is heading to Malayasia this weekend where she is to meet Hollywood director Steven Spielberg and actor Leonardo Di Caprio before flagging off Sunday's Grand Prix in Sepang.

"I like the sport," she said of race car driving, according to The Times of India newspaper, adding she is "excited to be meeting Steven Spielberg."