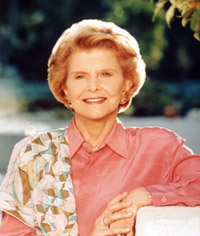 The surgery occurred earlier in the week and she was "recovering well" at Eisenhower Medical Center, the statement said Thursday.

No other information will be released for several days, the statement said.

Mrs. Ford is 88. Her birthday is Sunday.

After her husband's death on Dec. 26 at age 93, she went on an arduous cross-country trip accompanying his body for services in California, Washington, D.C., and to his final resting place in Michigan.

First lady from 1974 to 1977, she came to earn wide respect through her frankness as she battled breast cancer, arthritis and addictions to drugs and alcohol.