A man in a woman's wig and a string bikini was charged with taking a drunken romp through an Ohio park. 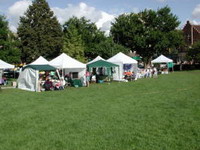 Steven S. Cole, a 46-year-old volunteer firefighter, told an officer he was on his way to a Dayton bar to perform as a woman in a contest offering a $10,000 (7,500 EUR) prize, the arrest report said.

He pleaded not guilty Thursday to charges of drunken driving, public indecency and disorderly conduct.

Cole was arrested Tuesday after police received a report that an intoxicated man was walking and driving around Heritage Oak Park in Mason. Police said Cole was wearing a blond wig, pink flip-flops and a red-black-and-white striped bikini with the top filled out by tan water balloons.

Cole remained free on his own recognizance until trial, set for May 24. Messages left for Cole and his attorney, Charles Rittgers, were not immediately returned.

Cole has been a Wayne Township firefighter since 2000. Township officials said he will be placed on administrative leave.