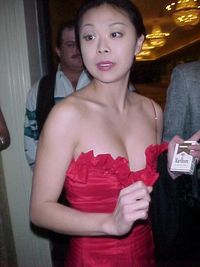 "251," a play about Annabel Chong, is also a new test of public tolerance for sex in a society that remains largely conservative, despite increasingly liberal attitudes among the young.

Admittance is only for those 18 and older. Tickets have been selling fast, with the play's opening performance and another 10 of its 14 scheduled shows in the 220-seat theater already sold out, said Toy Factory Productions' assistant marketing manager Bryan Teo.

"It shows Singaporeans are very curious about who Annabel Chong really is," Teo said. "They have all heard about the 251 sex acts, and now they want to find out more about her."

Chong shot to international adult film notoriety in 1995 when she performed 251 sex acts with 70 men in a video. Her performance was billed as world record-setting, but it impressed few in her home country. The video remains unavailable in Singaporean stores because pornography is banned.

"Whether we like her or absolutely hate her, we can't deny the fact that she is very much part of our national psyche," director Loretta Chen told The Associated Press in an interview last month.

The cast includes local actress Cynthia Lee-MacQuarrie and four others.

Chong, whose real name is Grace Quek, started working in adult films as a postgraduate student in California.

She said then the video was partly a reaction to growing up in Singapore, where individuality sometimes finds itself at odds with the wealthy city-state's tight social and political controls - a theme Chen said "251" would also tackle.

Chong retired from pornography in 2003 and is now said to be a U.S.-based Web designer. She has declined media interviews.

The play is being staged amid efforts by the government to shake off Singapore's straight-laced image to boost tourism and cater to a generation exposed to overseas influences.