One doctor wrote all 11 prescriptions for Anna Nicole Smith

One doctor authorized all 11 prescription medications found in Anna Nicole Smith's hotel room, most of them in the name of the starlet's companion, according to documents released by the medical examiner's office Wednesday. 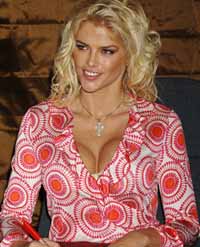 One doctor wrote all 11 prescriptions for Anna Nicole Smith

More than 600 pills were missing from prescriptions no more than five weeks old at the time of Smith's death, although it was unclear if she took all of them, according to information obtained by The Associated Press through a public records request.

Dr. Joshua Perper, Broward County's medical examiner, has said all of the drugs were meant for Smith, though they were prescribed in the names of others. A probe by the Seminole Police Department agreed with Perper's assessment that Smith's death was an accidental overdose and that there was no foul play.

Information released by Perper's office shows eight of the prescriptions were issued under the name of Howard K. Stern, the former Playboy model's lawyer-turned-companion. Two were for Alex Katz, though it was unclear if that was an alias or the name of someone connected to Smith. And one prescription was under the name of Smith's friend and psychiatrist, Dr. Khristine Eroshevich.

Eroshevich traveled with Smith to Florida, where she died, and the medical examiner's office said she authorized all the medications found at the Seminole Hard Rock Hotel and Casino in Hollywood, Florida, where the reality television star was found unresponsive Feb. 8. She was pronounced dead later that day at a hospital.

Calls to Eroshevich were not immediately returned Wednesday.

Candis Cohen, a spokeswoman for the California Medical Board, would not comment on any probe into Eroshevich; she said investigations of doctors are not public record and are not revealed.

Perper said two other doctors also prescribed Smith drugs, though those medications were not found in her hotel room. Because information on those drugs was turned over by Eroshevich, not through the course of authorities' own investigation, Perper said it remains part of Smith's private medical file and is not a public record.

Perper previously said he believed at least three doctors had prescribed Smith drugs. He was not immediately available for comment Wednesday to clarify.

The type of drugs found in Smith's system were disclosed with the release of her autopsy report last week, but the remarkable quantity apparently consumed was unclear until Wednesday's release of additional records.

The powerful sleeping aid chloral hydrate - the medication blamed with tipping the balance in the toxic mix of drugs and causing her death - was prescribed Jan. 2, and about two-thirds of the bottle was gone, according to the medical examiner's records.

The records show Smith had three prescriptions for muscle relaxants in her hotel room: two for carisoprodol, prescribed Jan. 2 and Jan. 26, and one for methocarbamol, under the brand name Robaxin, prescribed Jan. 2. Some 415 of the carisoprodol pills were missing from their containers as well as 33 of the Robaxin pills.

The records also show 62 tablets of the anti-anxiety drug Valium were missing from a prescription less than two weeks old at the time of Smith's death; 79 tablets of the anti-seizure medications Topomax and Klonopin; and at least two dozen diuretics, antibiotics, antivirals and potassium supplements.

Perper said despite the huge quantity of drugs, it was not clear how much was ingested by Smith.

Perper's autopsy found Smith was also taking the strong painkiller methadone, the anti-anxiety pill Ativan, and the muscle-building, weight-reducing agent human growth hormone, but none of the drugs were found in her hotel room.

Smith had a stomach flu and a temperature that rose as high as 105 (40.6 Celsius) degrees in the days before her death and she had an infection on her buttocks from repeated injections. Both the flu and the infection were considered contributing causes of her death.

Stern and two other men claim to be the baby's father.