Librarian signs deal for book about Dewey the cat

A cat that became an internationally known mascot for the library where he was found shivering in a book drop will have his life story written - for $1.2 million (EUR900,000). 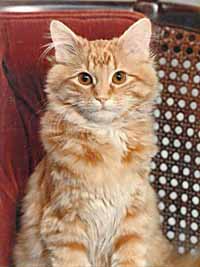 Librarian signs deal for book about Dewey the cat

Librarian Vicki Myron, who found the 19-year-old cat and named him Dewey Readmore Books, signed the deal to write his story and his impact on others.

"It's been huge," Myron said, including the new deal with Grand Central Publishing, formerly Warner Books. "It's been worldwide."

After Myron found Dewey in the library's book drop on a cold January morning in 1988, TV crews came to the small northwest Iowa town from as far away as Japan to do stories on the cat.

"It just floored me," Myron said. "This is the way Dewey's whole life went. He drew people in his whole life from around the world. We had nothing to do with it. It's serendipitous.

Myron said the book probably will not be published until spring 2008.

"A ghost author and I still have to write it," she said. "They will be coming in to do research this spring."

She said she recently sold the North American rights to the book. International rights were still being negotiated.

Dewey, named after the Dewey Decimal System, used in most libraries to catalog books, died after being diagnosed with a stomach tumor. Myron decided to take him to a vet and have him euthanized.

A local funeral home donated a black granite marker with a laser scanned image of Dewey. It will be installed once the ground warms up, Myron said.

"Dewey's life was amazing all the way through and so is his death," Myron said. "He was an amazing cat, and he still is."