It is meditation and deep breathing time for Bollywood actress Shilpa Shetty after the pressures of winning the British reality TV show "Celebrity Big Brother." 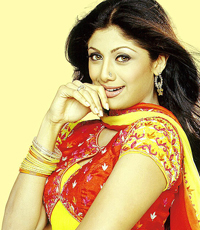 Shetty told the Mumbai-based DNA newspaper that she is hard at work on a yoga video.

"I'm not supposed to talk about it," said Shetty, a fitness enthusiast. "But yes, we're working really hard to make the project special."

British distribution company Eros International, which roped in Shetty as a health icon for the video, sees a potential overseas market resulting from her appearance on the reality show, the newspaper said Wednesday.

The 31-year-old Indian actress won the show in January after being confined in a house for about three weeks with other participants. One British contestant outraged the public and sparked allegations of racism by bad-mouthing Shetty's cooking of Indian food and mocking her accent.

The TV program was front-page news for weeks in both Britain and India. More than 8.8 million people tuned into the show to track the racism controversy.

Shetty later said the behavior of her primary tormentor, Jade Goody, was motivated by jealousy and insecurity and not racism.

Shetty has acted in more than 40 Bollywood movies since her 1993 debut. Her latest movie, "Metro," a Hindi-language film about careers pushing love to second place, is to be released next month.