Halle Berry gets star on Hollywood Walk of Fame 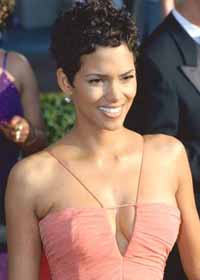 Halle Berry gets star on Hollywood Walk of Fame

Halle Berry has an Emmy, a Golden Globe and an Oscar. Now she has a star on the Hollywood Walk of Fame.

A teary-eyed Berry received the 2,333rd Walk of Fame star in a ceremony Tuesday in front of the Kodak Theatre.

"I am so emotional ... as soon as I saw the crowds of people and friends here, I started to cry," she said.

Berry won the best actress Academy Award in 2001 for her role alongside Billy Bob Thornton in "Monster's Ball." She won an Emmy and a Golden Globe for her title role in "Introducing Dorothy Dandridge."