Since the nationwide pet-food recall began two weeks ago ales of pet food recipe books have also shot up . 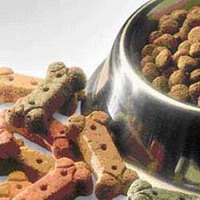 "I'm very suspicious of any large-brand manufactured dog food," said Parish, who lives in the Atlanta suburb of Tucker.

But veterinarians warn that making balanced meals for pets can be complicated and should only be a temporary remedy until the scare passes.

Nearly 100 store and major-brand pet foods were recalled by manufacturer Menu Foods Inc. on March 16. Three other companies have recalled some foods since then.

Food and Drug Administration testing found that wheat gluten imported from China was contaminated with a chemical used in the manufacture of plastics. The FDA has confirmed 15 pet deaths, and anecdotal reports suggest hundreds of cats and dogs may have died.

Some pet owners are not taking any chances.

He spent five hours in the kitchen Sunday, grinding beef and boiling potatoes and pasta for a week's worth of stew, supplemented with an all-in-one vitamin-mineral powder.

"These dogs are my family," Slavens said.

The FDA and the American Veterinary Medical Association are urging pet owners to switch brands if they are worried. The veterinarian group also warned that many common foods are not safe for pets, including salt, garlic, onions, grapes and chocolate.

Making pet food at home is "kind of like canning: You have to think about bacterial contamination. And how do you make sure it's nutritionally appropriate and balanced for the animal?" said FDA spokeswoman Julie Zawisza. She added: "We wouldn't object. We'd say be knowledgeable about what you need."

On Amazon.com, the cookbook "Real Food for Dogs" moved into the list of top 200 best-sellers this week.

Robert Van Sickle, co-owner of the Polka Dog Bakery in Boston, said he has received many inquiries from customers on advice for making their own dog food. For his German short-haired pointer, Van Sickle blends carrots, spinach, salmon oil, apple cider vinegar and whatever meat is in his freezer.

"What this scare has shown me is that it's amazing how many people don't know what they are feeding their dogs," he said. "The bright side, for me, as someone interested in animal wellness, is people are asking questions now."