Doggie yoga to join humans and their pets 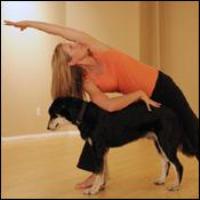 Doggie yoga to join humans and their pets

Something strange was going on in the end of a yoga class: many participants were flopped out on their mats, in a position their instructor called the "upward facing belly pose."

That's largely because about half the group was about to walk out on four legs: The Seattle/King County Humane Society now offers 40 minute classes of "doggie yoga."

Brenda Bryan, who teaches human yoga as well as the new class for both dogs and humans, says the dogs react to the gentle energy in the room.

"As we get into it, the dogs all kind of calm down," said Bryan, who developed the poses for the class by working with her own two dogs - Gus, a mixed breed, and Honey, a Shar Pei-Boxer mix - and talking to instructors in such cities as New York, Los Angeles and Pittsburgh where yoga for dogs and their owners is starting to catch on.

The question she and the Humane Society get the most from prospective human students is how do the people and dogs interact?

In Bryan's class, the humans do traditional yoga poses - yes, including "downward facing dog" - while staying in contact physically with their pets.

Part of the class includes gentle stretching and dog massage, another specialty of Bryan's, but most of the time the humans gently use the dogs like yoga props.

In downward facing dog, for example, the humans rest their heads on their companions, who are relaxing - napping? - on the mat.

The yoga poses are modified both for the humans of different sizes and abilities and for the dogs. During class, Bryan reminds people not to push their canine partners to perform.

"Don't be too ambitious," she said. "Honor where your dog is and remember that dogs respond to our energy."

Leilani, a toy poodle, is the star of the class, perhaps because the tiny 11-year-old is too timid to venture off the mat to play with the big dogs.

"I could just feel her relax," she said.

The class was designed to offer a new way for humans to spend time with their pets.

"This is 80 percent fun," said Eve Holt, director of community relations for the Seattle Humane Society.

Bryan calls it "partner yoga," because the class encourages both the human and the dog to increase their awareness of each other.

"Magnet and I were just in this little bubble," said Emily Keegans, referring to her black Labrador.

She said her dog really loves getting the one-on-one attention he receives in yoga class and she likes having another opportunity to both exercise and spend time with her dog.

"I love doing yoga and I'm just really busy. Just to spend time with him and be with him is great," added Keegans.

She said she was doing dog massage at a Humane Society fundraiser _ a dog fashion show _ when the agency director mentioned that she is also a yoga instructor. And the idea for doggie yoga was born.

"It was really just a marriage of all the things I love," Bryan said.

She said she hopes the class will open up yoga to a variety of people - and dogs - who have never done this kind of exercise before.