It's 21 pages of Grammy-winning singer Luis Miguel, his new son and the mother of his child, Aracely Arambula. 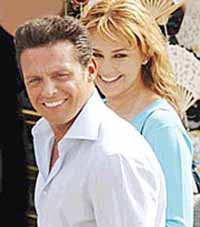 Mexico edition of Hola! magazine published in its March 29 issue the first official snapshots of the Mexican crooner and his new family.

They include a photo of Arambula breast-feeding the 2-month-old baby, named Miguel, in a designer dress while his smiling father looks on. Others show the couple playing with the new baby or in a passionate embrace.

It was unclear if the boy was the first child of Luis Miguel, a Mexican heartthrob who has been linked to a slew of female celebrities, including American singer Mariah Carey, reports AP.

Mexican actress Stephanie Salas has said repeatedly that Luis Miguel is the father of her daughter, Michelle, 18. Luis Miguel has never recognized the girl as his own.