Vanessa Williams honored with star on Hollywood Walk of Fame

In the years since Vanessa Williams was crowned the first black Miss America, she has sung on Broadway, released Grammy-nominated albums and acted on screens both big and small. On Monday, she received the 2,331st star on the Hollywood Walk of Fame. 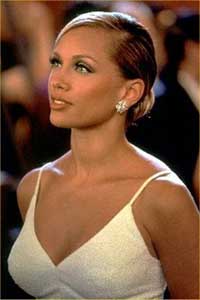 Vanessa Williams honored with star on Hollywood Walk of Fame

Although she plays a villainous magazine editor on the TV show "Ugly Betty," supportive castmates showed up to cheer for Williams at a ceremony in front of the Hollywood Roosevelt Hotel.

"When we wrote the pilot for 'Ugly Betty,' we needed a villain and I was worried about who would play that character," said Salma Hayak, the show's executive producer. "We were so happy to get Vanessa. She is brilliant because she is so nasty on the show, but in reality she is the sweetest person."

"Vanessa is a template for anyone to realize that by dreaming big and believing in yourself, you can overcome any seemingly insurmountable obstacle and that through hard work and perseverance, no one can limit what or who you are," he said.

Williams thanked fellow cast members for attending the ceremony on their day off, reports AP.

"I love working with these people," she said. "I also want to thank my family for allowing me to live my dreams. The sun didn't shine today, but my heart is shining."