He'd disappointed the previous day by failing to show for a panel discussion on narrative journalism, of which he is an unquestionable master. 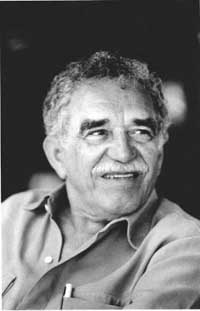 But publicity-shy Gabriel Garcia Marquez, who turned 80 this month, did finally appear Monday at the semi-annual meeting of the Inter American Press Association as it ended with a luncheon.

He seemed to wish he hadn't.

The Nobel literature laureate, whose "Hundred Years of Solitude" is being lauded these days as the best novel in the Spanish language since Cervantes wrote "Don Quijote" 400 years ago, is a national icon in his native Colombia.

People treated him like a museum piece as he dined with journalist friends in a big tent at the IAPA meeting.

Dozens jostled with two police officers standing guard to have their pictures taken with literary celebrity, known endearingly as "Gabo," and to have books autographed.

One woman tried to get him to autograph a notepad. He refused.

Garcia Marquez has in recent years shunned interviews assiduously - even with journalists he knows well.

"How about a few words for Cararcol radio," he said, thrusting a microphone in front of the fabled writer.

Noting how crushed the reporter looked, the aging writer softened.

Garcia Marquez is being feted in Cartagena, his second home after Mexico City, at the Fourth International Congress of the Spanish Language that begins this week.

He was also celebrated effusively across Latin America for his birthday. This year also marks the 40th anniversary of the publication of "One Hundred Years of Solitude" and 25 years since he won the Nobel.

Garcia Marquez arrived just as the richest man in the world, Bill Gates, was departing the IAPA meeting.

He clearly wished he'd had the security detail afforded the Microsoft chairman to fend off the overzealous admirers.

He threw up his hands before he got into the auto and left.