Actress Kate Winslet was awarded substantial libel damages Friday after a British magazine wrongly stated that she had visited a diet doctor. 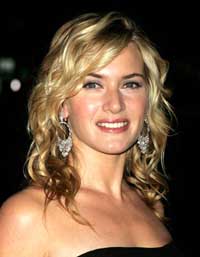 The curvy actress, known for her outspoken criticism of excessive dieting, was not at London's High Court for the hearing into an article published by women's magazine Grazia last month.

Winslet's lawyer, Rachel Atkins, said the article wrongly stated that the 31-year-old performer had sought the help of California-based Chinese herbalist Yi Pan for her weight, despite vowing not to bow to Hollywood pressure on actresses to be skinny.

Atkins said Winslet had visited Pan for a neck injury.

Grazia printed an apology in its March 5 issue, saying it was "very happy to set the record straight."

Five-time Oscar nominee Winslet said in a statement that she was delighted by the outcome, adding that the magazine had apologized to her in full, reports AP.

"I am not a hypocrite," she said. "I have always been, and shall continue to be, honest when it comes to body/weight issues. I feel very strongly that 'curves' are natural, womanly and real."

Lawyers for Winslet said she would be donating the unspecified but "substantial" damages payment to charity.