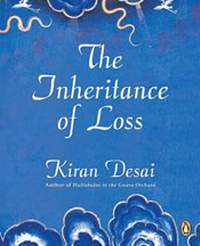 "To be claimed by the place in which you live means so much," said Desai, who now lives in New York.

The daughter of author Anita Desai, she worried about the "perverse" luck of her book, although she was clearly prepared to win, reciting a poem by Jorge Luis Borges. "The Boast of Quietness" reads, in part, "More silent than my shadow, I pass through the loftily covetous multitude."

Six prizes and two honorary awards were handed out at the 33rd annual critics award ceremony. Simon Schama's "Rough Crossings," a history of slaves who fought with the British during the Revolutionary War, won for general nonfiction. Julie Phillips' was the biography winner for "James Tiptree, Jr.," the pen name for science fiction author Alice B. Sheldon.

Phillips, who took 10 years to complete her book, accepted the award by quoting Sheldon, who committed suicide in 1987: "Life is fair. Some people have talent; other people get prizes."

Daniel Mendelsohn's "The Lost," a memoir of six family members lost in the Holocaust, won for autobiography. Troy Jollimore's "Tom Thomson in Purgatory," a debut collection, was a surprise for poetry, chosen over such celebrated finalists as W.D. Snodgrass, Frederick Seidel and the late Miltos Sachtouris.

"I'm stunned, and I may not be the only one," said Jollimore, who smiled and shook his head in disbelief when he heard his name announced.

The criticism prize went to Lawrence Weschler's "Everything That Rises," which beat out, among others, Bruce Bawer's controversial "While Europe Slept: How Radical Islam is Destroying the West from Within," a book that even members of the NBCC have called racist and anti-Muslim.

Steven G. Kellman, whose work has appeared in The Texas Observer, The Georgia Review and other publications, won the Nona Balakian Citation for Excellence in Reviewing. Longtime critic John Leonard, who has written for The New York Times, The New York Review of Books and The Nation among others, won the Ivan Sandrof Life Achievement Award, the AP says.

In accepting his honorary award, Leonard joked about appearing before "a roomful of people so innocent of the profit motive." The head of the book critics circle, John Freeman, began the evening by noting the trend of shrinking review coverage and reminding the audience - who needed little reminding - that criticism was a kind of "Ellis Island" for culture, a passageway for the best writing.

The National Book Critics Circle, founded in 1974, has nearly 500 members. There are no cash prizes, but a great deal of prestige. A solid majority of nominees showed up, including such high-profile writers as novelists Richard Ford and Dave Eggers and historian Taylor Branch.