Chinese PC maker Lenovo Inc. recalled about 205,000 laptop computer batteries worldwide, warning that they could overheat and cause a fire. 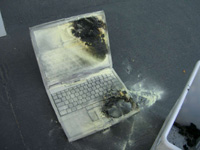 The battery recall announced Thursday was the second for the company in the past six months and comes as Lenovo, the world's No. 3 computer maker, tries to gain ground on its better-known competitors.

The latest recall includes about 100,000 batteries in the United States and another 105,000 worldwide, Lenovo spokesman Bob Page said. The recall involves batteries made by Japan's Sanyo Electric Co. and follows four reports of overheating. In one case, a user suffered minor eye irritation, the company said.

Lenovo, which has its world headquarters in North Carolina's Research Triangle Park, said consumers should stop using the recalled products immediately. It said the batteries can overheat if the laptop is dropped a certain way, striking the battery on a corner edge.

Sanyo officials defended the batteries Friday, saying the problems resulted from a strong external impact to the battery and were not triggered by the batteries "themselves."

Sanyo said it was supporting Lenovo's recall and has already taken steps toward "working together with Lenovo and putting the first priority on consumer safety."

The advisory was made with the U.S. Consumer Product Safety Commission.

In September, IBM Corp. and Lenovo said they were seeking the recall of 526,000 rechargeable, lithium-ion Sony batteries purchased with ThinkPad computers after one of them caught fire at Los Angeles International Airport. Lenovo bought IBM's personal computer division in May 2005.

The earlier recall was part of a global recall of more than 10 million Sony-built batteries that were used in notebooks from Apple Inc., Dell Inc., Lenovo and others.

An industry analyst said the recalls should not hurt the company, the AP said.

"I don't think at this point it negatively affects the company given last year there was practically an industrywide recall based on the batteries," said Martin Kariithi of Technology Business Research, a New Hampshire-based group that studies the computer industry. "It's not likely to have an impact on earnings because the manufacturer pays for the costs of a recall."

Kariithi said last year's recall ate into Sony's fourth-quarter profits, and that Sanyo would suffer similarly with this latest recall.

"Sanyo is going to financially support the recall," said Lenovo spokesman Ray Gorman. "From a competitive perspective, we expect this recall to have only minimal, if any, impact."

Lenovo bought IBM's personal computer division in 2005 and about 1,500 of Lenovo's 20,000 employees work in Research Triangle Park, the AP says.

Lenovo cut 1,000 jobs worldwide last year and had an operating loss in the most recent quarter for the division that covers the U.S. and Canada. The company's chief financial officer has told analysts the situation in North America "is the cause of greatest concern."

Meanwhile, in Asia, companies such as Dell are gaining ground and sales growth for Lenovo is slowing, adding pressure on the company to increase sales in Europe and the U.S.