For everyone in the audience who ever wanted to get up on stage and dance with Eminem - and not get punched out by a bodyguard - there may finally be a way. 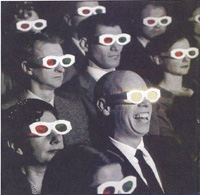 "We want to provide audiences with a more intense musical experience," Cameron said in a statement. "Three-D amplifies everything. It puts you closer to your favorite artists than you ever imagined."

The films will be shot using a digital stereo camera system that Cameron helped develop and tested last year when he filmed an unreleased 3-D version of Gwen Stefani's "Wind it Up" video. The result puts the audience right on stage with the performers, according to representatives of Cameron and Interscope, the AP reports.

"We're always looking for ways to improve the experience of music," said Jimmy Iovine, chairman of Interscope, which is home to such artists as Eminem, U2, Dr. Dre, Sheryl Crow and the Pussycat Dolls. "When I saw what James Cameron was doing with his dedication and wizardry to the 3-D platform, it seemed like the perfect combination for us to do some groundbreaking work."