Japanese publisher said Friday it has decided to scrap a translation of a new book on Japan's royal family that has sparked protests from Japan's government. 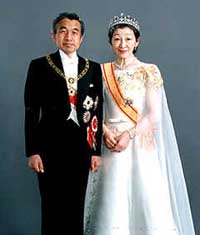 "Princess Masako: Prisoner of the Chrysanthemum Throne," penned by Australian journalist Ben Hills, was released by Random House in December and its billed as a biography of the 43-year-old diplomat-turned-princess, who has suffered for years from stress-induced illness.

Japan's Imperial Household Agency and Foreign Ministry had demanded an apology from the author for "disrespectful descriptions, distortions of facts and judgmental assertions with audacious conjectures and coarse logic."

Kodansha Ltd. denied it was scrapping the Japanese translation because of the protest.

Kodansha editor Kazunobu Kakishima said the decision was in response to Hills' refusal to admit making factual errors during an interview with a Japanese television earlier Friday, causing the publisher to "lose faith" in him as journalist.

"We have come to the conclusion that it is impossible to maintain trustworthy relations wit the author and thus we were forced to cancel the book," he said.

Kakishima called Hills' denial of errors in the book and refusal to apologize "extremely inappropriate." Hill has acknowledged the errors, approved corrections in a translated draft and even thanked the publisher for the corrections, he said.

The book details Masako's life in the palace, during which she has come under grinding pressure to produce a male heir to the throne. After suffering a miscarriage in 1999, she and Crown Prince Naruhito had a daughter, Aiko, in 2001. The couple were married in 1993, reports AP.

Kakishima said a "substantial number of factual errors" found in the original, including those mentioned by the Japanese government, have been corrected through fact-checking and meetings with interviewees quoted in the book.

"We were extremely disappointed," he said. "A journalist who refuses to acknowledge his own mistakes is unthinkable."

Hills said in his e-mail to The Associated Press this week that he had no intention to offer an apology and that the government was trying to pressure publisher Kodansha to shelve a planned Japanese version of the book.

Kakishima said the publisher has notified Hills and Random House of the decision.