Russell Crowe says pom-poms are out and drums are in at the rugby league club he part-owns in Australia because skimpily-clad cheerleaders detract from the game and make spectators uncomfortable. 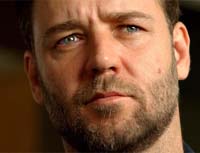 The South Sydney Rabbitohs club announced this week it would be dispensing with its cheerleading squad and replacing them with a team of percussionists to gee-up supporters.

Oscar-winning Crowe, a longtime Rabbitohs supporter who helped save the club from obscurity a few years ago before buying a major stake in 2006, said the club had become concerned the cheerleaders - whose uniform includes fishnet stockings and tasseled miniskirts in the white, green and red team colors - were inappropriate entertainment, the AP reports.

"It makes women uncomfortable and it makes blokes who take their son to the football also uncomfortable," Crowe was quoted as saying in News Ltd. newspapers on Friday.

"We examined game day and wanted to contemporize and make the focus football," he said.

The club Web site on Friday invited drummers to audition to become part of the new cheer squad.