Jennifer Lopez's first husband, Ojani Noa, was ordered to enter arbitration with the pop star over his plans for a tell-all book about their brief marriage. 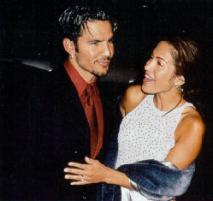 Lopez filed a Superior Court breach of contract suit nine months ago and got a restraining order barring Noa from publishing intimate details of their sex life. She also asked for arbitration.

"This is about my life, coming here from Cuba and falling in love with Jennifer," Noa said.

On Monday, Superior Court Judge Victor H. Person agreed with Lopez lawyer, Paul N. Sorrell, that Noa was bound to arbitration under terms of an October 2005 settlement of another lawsuit.

A progress hearing in the arbitration proceeding will be held July 30.

Noa, who showed up in court again without a lawyer, objected to the arbitration order, saying he wanted the benefit of a public trial of the case.

"Basically, they were trying to damage my name and my career, now they want to go private in arbitration," Noa, 31, told the judge.

Lopez, 36, has made every effort to keep the details of the dispute private, but had to go public with her lawsuit in order to get a preliminary injunction against Noa, Sorrell said.

Lopez's damages could be in excess of $10 million (Ђ7.74 million) if the book is published, the attorney said.

In the previous lawsuit, Noa sued Lopez for breach-of-contract, alleging she lured him into taking a managerial job in 2002 at her Pasadena restaurant, then fired him five months later, reports AP.

Lopez, who has appeared in such films as "Selena," "Out of Sight " and "Monster-in-Law," married Noa in February 1997 after meeting him in a Miami restaurant. They divorced 11 months later.