Oprah Winfrey is the world's richest female entertainer, according to finance bible Forbes. 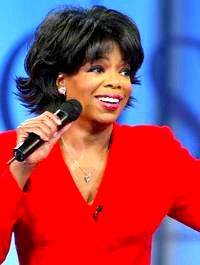 The American talk show queen is worth a staggering $1.9 billion, according to the prestigious magazine. Oprah, 52, pockets $286 million a year from her Chicago-based media empire.

Rowling's boy wizard novels are the world's best-selling series, and the movie versions have pulled in $4.4 billion.

In fourth place is pop queen Madonna, who is worth an estimated $254 million.

The 48-year-old Material Girl is the highest ranked singer, and according to Forbes her "portfolio is also crammed with expensive items like contemporary art, real estate and a wardrobe of no small historical significance".

A one-hour special, The 20 Richest Women in Entertainment, airs Saturday on E!.