Two authors who failed to persuade Britain's High Court that Dan Brown stole their ideas for his blockbuster novel "The Da Vinci Code" were taking their case to the Court of Appeal on Tuesday. 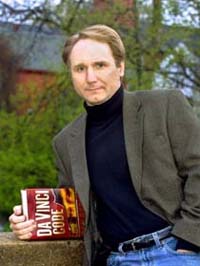 Michael Baigent and Richard Leigh claim that Brown borrowed the central theme of their book "The Holy Blood and the Holy Grail" for his multimillion-selling thriller. Both books deal with a theory dismissed by theologians that Jesus and Mary Magdalene married and had a child, and that the bloodline continues to this day.

In April, Justice Peter Smith ruled that Random House, publisher of "The Da Vinci Code," had not breached the copyright. Smith said Baigent and Leigh's claim had been based on a "selective number of facts and ideas artificially taken out of (the book) for the purpose of the litigation."

"The Da Vinci Code" has sold more than 40 million copies since its release in March 2003. A film version starring Tom Hanks was released last year.

"The Holy Blood and the Holy Grail" also published by Random House was a best seller on its release more than 20 years ago, and climbed sales charts again thanks to publicity surrounding the case.