Japanese treat their aging animals with underwater treadmills and acupuncture

Andy has sprouted white whiskers, suffers from lower back pain and no longer bounds up the stairs like he used to. 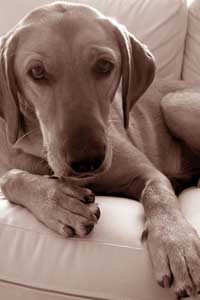 Japanese treat their aging animals with underwater treadmills and acupuncture

Still, the 11-year-old Siberian husky isn't lying idle: every week he meets his personal trainer for a run on an underwater treadmill, does laps in a doggy pool to strengthen his hind legs and unwinds with a hot spa and massage session.

The boom in pet ownership in Japan has led to a new phenomenon: legions of elderly animals that doting masters pamper with fortified food and vitamins, aromatherapy and even acupuncture.

"I want to do everything I can for Andy. He's part of the family," said Aya Ashiya, 50, of Tokyo as she ran around the swimming pool with a squeeze toy, cheering the husky on during a recent session at the dog aqua fitness gym El Pero.

"We've been together for so long, and we've really learned to communicate," Ashiya said. "I just want him to stay healthy for as long as possible."

Though figures are scarce, a study published last year showed that longevity for cats in Japan almost doubled between 1991 and 2003, from 5.1 years to 9.9 years. Dog longevity surged from 8.6 years to 11.9 years.

Researchers attribute the jump to better health care, more vaccinations, a more balanced diet and a new trend of pets being allowed to live in homes once unthinkable in a country of tatami-mat houses.

But longer lives have led to ailments seldom seen before in pets in Japan, such as cancer, diabetes, heart disease and dementia, said Hideki Hayashidani, an assistant professor at the Tokyo University of Agriculture and Technology, who carried out the longevity study, reports AP.

"Japanese attitudes toward pets have changed radically. Owners dote over them like children," Hayashidani said. "That means fewer pups and kittens die from infections, while cancer and heart disease cases have hit the roof ... And owners will pay anything to keep their pets alive longer."

Japan's doting owners have helped push pet spending to new highs. The pet industry here topped $8.6 billion in 2005. That's only a quarter of expenditures in the United States, but for Japan represents a 40 percent increase since 1994.

In a sign of the nation's growing obsession with animal companions, industry figures show Japanese families now own over 23 million pet dogs and cats, exceeding the number of Japanese children under 15, which hit a new low of 17.46 million in 2006.