Harry Potter author J.K. Rowling says she has dreamed that she was the boy wizard as she writes the seven-book series' final installment work she says has left her feeling both "elated and overwrought." 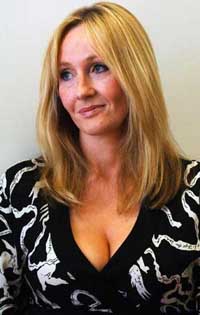 Rowling said in a message posted Tuesday on her official Web site this week that she has been hard at work writing scenes, some of which she planned more than 12 years ago.

"I am alternately elated and overwrought. I both want and don't want to finish this book (don't worry, I will)," she wrote.

She gave no new clues about what will happen in the book, which is expected to be published next year. Previously she said two characters will die, and hinted Harry might not survive.

Rowling said she has been asked for years if she ever dreams she is in the boy wizard's world, reports AP.

"The answer was 'no' until a few nights ago, when I had an epic dream in which I was, simultaneously, Harry and the narrator," she wrote.

"Perhaps I should cut back on the caffeine?" she joked.

Rowling also said she saw a 20-minute preview of the fifth Harry Potter film, "Harry Potter and the Order of the Phoenix," which she said "looks fantastic." The latest movie in the blockbuster series will be released in July.

The Harry Potter books have sold more than 300 million copies and have been translated into 63 languages.