Human rights organizations will help decide whether Madonna is fit to adopt a Malawian toddler, a judged ruled Wednesday. 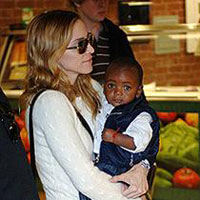 Judge Andrew Nyirenda ruled in favor of a coalition of 67 Malawian human rights and child advocacy groups who want to be party to the assessment of the pop singer's fitness as a mother and to review Malawi's adoption procedures.

Nyirenda on Oct. 12 granted Madonna and her filmmaker husband Guy Ritchie an interim order allowing them to take initial custody of 14-month-old David Banda. Malawi regulations stipulate that prospective parents undergo an 18-to-24 month assessment period in Malawi, but Madonna was allowed to take the boy to her London home soon after receiving the interim order.

The rights groups were concerned that the government cut legal corners to "fast-track" the adoption, and said regulations must be followed to protect children.

"I must stress that all along we have not been against the adoption but we only wanted Malawi's adoption laws clarified and followed to the letter," said Justin Dzonzi, a lawyer and chairman of the Human Rights Consultative Commission. "Today's ruling gives us the opportunity to clear some gray areas surrounding adoption laws in Malawi."

Nyirenda said in his written order that he saw no reason to refuse the rights groups' application.

In a country ravaged by AIDS, an estimated 2 million children have lost one or both parents and hundreds are adopted by foreigners every year. Madonna's adoption bid coincided with her larger project to help Malawian orphans.

The human rights group argue Malawi needs to ensure the adoption process cannot be exploited by pedophiles or child traffickers.

Madonna has said she met all the country's requirements. And David Banda's father, who put the toddler in an orphanage shortly after his wife died of childbirth complications, has said the human rights group's lawsuit threatens his son's future.

Dzonzi has said that Malawi's current adoption laws are archaic and routinely flouted to allow foreigners to adopt, reports AP.

Malawi's Department of Gender and Child Welfare Development has said a team of Malawian child welfare officers would fly to London to make the first assessment in the Madonna case in May 2007 and one more assessment will be done by December 2007 before a report is filed on the suitability of the Ritchies as adoptive parents.

Dzonzi said Wednesday the members of his organizations would have to meet to prepare for the assessment and final decision of the court on whether the adoption should proceed.