Gotti grandson could serve one year in prison after drug arrest 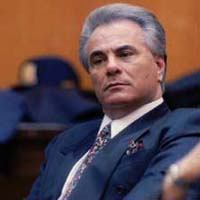 Gotti grandson could serve one year in prison after drug arrest

Frank Agnello, 16, was found with marijuana, OxyContin painkillers and morphine pills when authorities pulled him over on a Long Island road for failing to heed a stop sign, Suffolk County police Lt. Donato Mignone said Monday.

The teenager, who was driving a rented sport utility vehicle, was charged with two counts of criminal possession of a controlled substance, police said. He could face up to a year in prison if convicted.

He was also given a summons for driving without a license, police said.

Mignone said that police discovered the OxyContin and morphine pills in the SUV's glove compartment, console and trunk. He said that two passengers were also charged, reports AP.

Agnello's attorney, Adam Mandelbaum, said that no drugs were found on Agnello during the Nov. 10 arrest in Dix Hills. "The rest of the matter is under investigation," Mandelbaum said.

He said Agnello will plead not guilty at a Jan. 24 hearing in Central Islip, a town in Suffolk County, which is on Long Island, east of New York City.

Agnello is the son of Victoria Gotti daughter of Mafia boss John Gotti and sister of John "Junior" Gotti. The teenager starred in the reality TV series "Growing Up Gotti" and wrote a book, "The Gotti Diet."

John Gotti, the Gambino crime family boss who became known as the "Dapper Don" for his expensive taste in clothes, was finally convicted of racketeering and murder in April 1992. He died 10 years later in a federal prison.