"Chunder" Down Under: Elton John feels ill on stage

Elton John was struck by a bout of nausea during a concert in Australia, and told the audience after briefly leaving the stage he'd gone to "chunder in the toilet," according to a news report Monday. 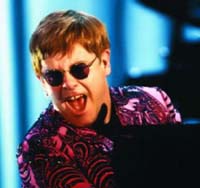 "Chunder" Down Under: Elton John feels ill on stage

John left the stage without a word about two hours into his first concert of an Australian tour in Brisbane, and was gone for about five minutes, Australian Associated Press reported.

When he returned, John told the audience he left the stage to vomit, using an Australian colloquialism.

"I thought I'd better chunder in the toilet (rather) than all over the front row," AAP cited him as telling the audience.

John has been a regular visitor to Australia for decades, and the current national tour is his 12th since 1971.