A Bruce Lee-themed park with a statue and memorial hall will be built at the late Hong Kong action star's southern Chinese ancestral home of Shunde, the president of his fan club said Monday. 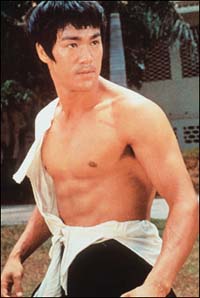 The Apple Daily newspaper reported Monday the park was budgeted at 200 million Chinese yuan (US$25.5 million; Ђ19.4 million) and was due to be completed in three years.

Wong said he couldn't confirm the details of the report.

However, Wong said he, Lee's younger brother Robert and actress Betty Ting Pei in whose home Lee died attended the planned park's foundation-laying on Sunday in Shunde, near Hong Kong.

The newspaper said the actress donated to the museum a set of nunchucks a weapon consisting of two sticks joined by a chain or rope that Lee once used.

Wong said that he was not certain who is funding the upcoming park, and that the Bruce Lee Club has offered to advise the builders.

Lee was born in the U.S. city of San Francisco. He soared to stardom in the early 1970s with an intense fighting style and by portraying characters that defended the Chinese and working class against oppressors.

He died of an edema, or swelling of the brain, at age 32 in 1973 in Hong Kong, having completed just four films.