Liv Tyler says when she first saw the title of the script for her new film, "The Strangers," she thought it was a comedy. 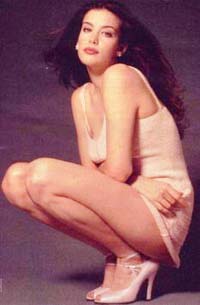 Turns out it was a thriller about a couple trying to survive when three masked strangers invade their home.

"I had stacks of scripts on the plane," she told the Morning News for Thursday's editions. "I liked the title of this one because it sounded like a comedy. After reading the first three pages, I was stuck on the script and called my agent and said `Please get it for me. I want to be in this movie.' "

She has been in Florence making "The Strangers," costarring Scott Speedman, since Oct. 10. Filming is expected to be finished Dec. 4 and the film is scheduled for release next October.

"It has a horror element and a thriller element, but it also has a human element," said Speedman, who starred in the television show, "Felicity." "To come in every day and getting, right away, to that level of intensity, that level of fear and anger it can be draining."

To recharge, the film's crew has hit a few local spots, including a karaoke bar. "Anytime you're on location and can get to know a small town, that's great," Speedman said.

For Tyler, the town's location in the heart of South Carolina's tobacco country has been a blessing.

"What's really great about this place is you can smoke almost anywhere," she said.

Tyler took last year off after the birth of her first child, Milo, with husband, Royston Langdon. She said she returned to acting because her time off made her realize how much she liked her work, reports AP.

"It was really a reflective period for me, and I was asking myself all the questions, `Should I retire and move to the country and have lots of babies?' " she said. "That year off helped me realize I love what I do."

Tyler, daughter of Aerosmith lead singer Steven Tyler, played the elf princess Arwen in "The Lord of the Rings" trilogy. Her screen credits also include "Jersey Girl" and "Armageddon."