U.S. retailers were set to usher in the start of the holiday season Friday with expanded hours, generous discounts and free money in the form of gift cards. 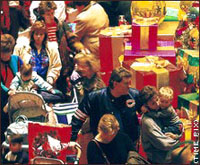 In a slowing but still steady economy, retailers like Wal-Mart Stores Inc. were increasing the sales pitch to shoppers, hoping to grab customer dollars before the competition does. A growing number of stores and malls even threw open their doors at midnight to jump-start the season.

Thursday was the Thanksgiving national holiday. The day that follows it is known as Black Friday, so named because it was traditionally when the surge of shopping made stores profitable.

Wal-Mart, the world's largest retailer, which promised its most aggressive price strategy ever this holiday season, is using heavily discounted flat-screen TVs like Viore 42-inch plasma TVs for $988 (Ђ763) to attract shoppers to its doors for its 5 a.m. opening Friday.

Meanwhile, Sears Holdings Corp.'s Sears, Roebuck and Co., which opens at 5 a.m. Friday, one hour earlier than a year ago, will be giving out $10 (Ђ8) reward cards for the first 200 shoppers that show up to the stores. Other early bird specials include Protron 37-inch (94-centimeter) LCD HDTVs for $949.99 (Ђ733) and 50 percent discounts on many toys. At Sears Holdings' Kmart stores, shoppers will find 50 percent discounts on men's and women's outerwear as part of its early morning doorbusters.

"Retailers are doing more to get consumers into the stores earlier this year," said C. Britt Beemer, chairman of America's Research Group, based in Charleston, South Carolina.

While Black Friday officially starts holiday shopping, it's generally no longer the busiest day of the season that honor now falls to the last Saturday before Christmas. But stores see Black Friday as setting an important tone to the overall season: What consumers see that day influences where they will shop for the rest of the season.

This year, analysts expect robust holiday sales gains for the overall retail industry, though the pace is expected to be slower than a year ago. The National Retail Federation projects a 5 percent gain in total holiday sales for the November-December period, less than the 6.1 percent in the year-ago period.