Nursing moms rally behind woman removed from plane after breast-feeding

Carrying signs with slogans such as "Best in-flight meal ever," scores of mothers breast-fed their babies at airports around the United States in a show of support for a woman who was ordered off a plane for nursing her daughter without covering up. 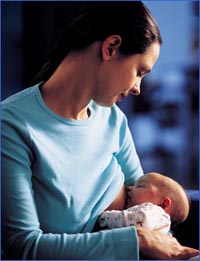 Nursing moms rally behind woman removed from plane after breast-feeding

"It's about raising consciousness about our culture's sexualization of the breast. Breast-feeding needs to be supported wherever and whenever it happens. Babies don't know the meaning of `wait,"' said Chelsea Clark, 31, wearing a "Got breast milk?" T-shirt as she nursed her 9-week-old son at the Burlington airport on Tuesday.

About 25 women turned out for the "nurse-in" at the airport, parking themselves near a ticket counter in a peaceful but not-so-quiet demonstration. Similar protests were held at airports in Boston; Las Vegas; Columbus, Ohio; Nashville, Tennessee; Harrisburg, Pennsylvania; Hartford, Connecticut; Albuquerque, New Mexico; and Louisville, Kentucky.

Some of the women carried signs that read, "Don't be lactose intolerant" and "Breasts - Not just for selling cars anymore."

On Oct. 13, Emily Gillette, 27, of Santa Fe, New Mexico, was ordered off a Freedom Airlines plane about to take off from the Burlington airport after a flight attendant asked her to cover up while she was breast-feeding her year-old daughter.

She had been sitting on the New York-bound plane which was three hours late in leaving when she began nursing. The flight attendant handed her a blanket, but she refused it. She was removed from the plane along with her husband and child.

The airline later disciplined the unidentified employee. But "lactivists" and women's rights supporters were outraged, and Gillette filed a complaint with the Vermont Human Rights Commission.

"It's a basic human thing that we are doing and we should be able to do it in public without being kicked off planes, without being told to sit in bathrooms," said Susan Parker, 30, who participated in a demonstration at Bradley International Airport near Hartford, Connecticut, along with 10-month-old daughter Anna, reports AP.

Gillette herself joined about 30 women, children and fathers at the Albuquerque airport. "When women are harassed for breast-feeding, a woman can end up feeling ashamed and she shouldn't," she said.

A the Nashville airport, about 25 mothers, fathers and children took part in a demonstration, holding signs that said "Breast fed is best fed" and "Best in-flight meal ever." About 40 mothers nursed their babies at the Portland, Oregon, airport.