Hollywood actress Angelina Jolie has made an unannounced visit to Cambodia, a country where she is funding a nature conservation project, officials said Wednesday. 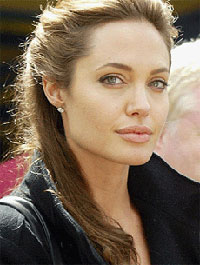 He said Jolie had a brief discussion about a forest conservation project near Pailin with Ieng Vuth, another municipality deputy governor and the son of former Khmer Rouge Foreign Minister Ieng Sary.

"They came very briefly before flying out. They seemed not to have much time for us," he said, declining to elaborate.

It was not clear when Jolie arrived in Cambodia and who is accompanying her. She has been filming a movie in India in recent weeks.

The 31-year-old actress who has a child with her partner Brad Pitt has promised up to US$1.3 million (Ђ1 million) over five years for a forest conservation program that was approved by the Cambodian government in 2003.

Stephan Bognar, executive director of the Maddox Jolie Project, named after the actress' adopted Cambodian son, could not immediately be reached for comment. Calls to his phone went unanswered.

Jolie has recently been embroiled in a dispute with her former Cambodian associate in her conservation project, Mounh Sarath, the director of the group Cambodian Vision in Development.

Trevor Neilson, her philanthropic and political adviser, told The Associated Press in New York last month that Mounh Sarath has misappropriated "hundreds of thousands of dollars" Jolie had provided for the conservation effort.

On Wednesday, he said he knew about Jolie's visit to Pailin. He said she was trying to avoid him despite his request to meet with her to talk about the allegedly missing funds. He said he can account for all the money received from Jolie in the past.