Lawyers for broadcaster CBS Corp. argued that singer Janet Jackson's breast-baring at the Super Bowl football championship halftime show in 2004 was unintended, took place without the knowledge of the network, and should not be considered indecent. 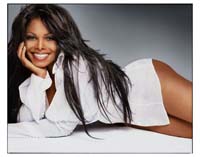 CBS is suing the Federal Communications Commission in the 3rd U.S. Circuit Court of Appeals in Philadelphia, challenging a $550,000 (Ђ428,300) fine issued by the agency over the stunt, which created a national furor.

In a court brief, CBS argued that the FCC had "failed to turn up even a shred of evidence suggesting that anyone at CBS participated" in the so-called "wardrobe malfunction," and that the commission had abandoned its long-standing approach that "fleeting, isolated or unintended" images should not automatically be considered indecent, reports AP.

In response, the FCC released a statement charging that the network "continues to ignore the voices of millions of Americans, Congress and the commission by arguing that Janet Jackson's halftime performance was not indecent ... we continue to believe they are wrong."

The show aired on Feb. 1, 2004, to an estimated audience of 90 million. During a musical number, singer Justin Timberlake pulled off part of Jackson's bustier, briefly exposing one of her breasts.

In its filing, CBS described the flashing as an "unscripted, unauthorized and unintended long-distance shot of Ms. Jackson's breast for nine-sixteenths of one second."

The network claims that Jackson and Timberlake "independently and clandestinely devised the finale" without informing anyone at the network.

In the 76-page brief, the network also said the fine should be dismissed because the broadcast itself was "neither explicit nor graphic."

The network stated that the "blink and you miss it" nature of the episode went "largely unrecognized for most of the broadcast audience."

CBS argued that the FCC's "zero tolerance approach to indecency enforcement" eliminated the "breathing space to which CBS and all broadcasters are entitled to exercise their First Amendment rights."

In another high-profile broadcast indecency case, CBS and Fox Television Stations Inc. are expected to file a brief Wednesday in a federal appeals court in New York challenging the FCC's policy on how it fines shows that air foul language.