Two senior Malawian officials on Thursday praised Madonna for adopting a child from their country, and rebuked those who have criticized the pop star. 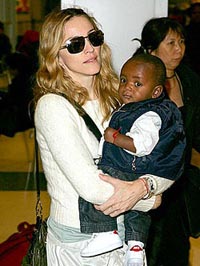 Madonna's efforts to adopt a motherless 13-month-old boy, David Banda, have set off a media storm. She and her husband, filmmaker Guy Ritchie, were granted an interim adoption order by Malawi's High Court last month.

Some critics have said it would have been better for the boy if Madonna had helped his impoverished father to care for him at home in Malawi.

"What Madonna has done is great," said Education Minister Anna Kachikho during a visit to a school in the Scottish capital.

"Here is Madonna who has picked a son from a Malawian father who has lost a wife and nobody takes care of, and she says 'I would like to educate and bring home that child.'

"I'm against whatever people are saying against Madonna, if there is credit to give we should credit Madonna because she is saving the life of this young David. Why condemn Madonna? ... We should thank Madonna," she added.

"On top of all that she has opened up her home to this one child. So it's not just about David, it's about her reaching out to Africa, to a country called Malawi, to empower 4,000 children which not many people have done," Banda said. "So the Malawi government is grateful."

The ministers were attending the launch of two Scottish-led training schemes aimed at helping teachers from Malawi.