First it was one child. Now authorities say Beijing families will be allowed only one dog. 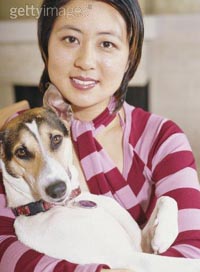 The restriction is part of efforts to stamp out rabies, state media said Wednesday. It follows a campaign in August in which thousands of dogs were killed in order to fight the disease.

China's capital will institute a "one dog" policy for each household in nine areas, the official Xinhua News Agency said.

"Only one pet dog is allowed per household in the zones, and dangerous and large dogs will be banned. Anyone keeping an unlicensed dog will face prosecution," Xinhua said.

Rabies is on the rise in China, with 2,651 reported deaths from the disease in 2004, the last year for which data were available.

Only 3 percent of China's dogs are vaccinated against rabies, which attacks the nervous system and can be fatal.

China has limited most urban couples to one child and those in the countryside to two since the 1970s in an effort to limit population growth and ease the strain on resources.

The dog limit was announced by Beijing police and the city agencies for agriculture and commerce, Xinhua said.

A notice on the police department's Web site did not refer to a "one dog" policy but said a clampdown on stray and large dogs would be implemented.

It called on dog owners to "create a harmonious society and be a civilized dog raiser."

Harmonious society is the term for President Hu Jintao's campaign to share the gains of China's rapid economic growth more fairly across all levels of society.

Authorities prompted an outcry in July and August when they launched several mass-slaughters of dogs to curb outbreaks of rabies, reports AP.

In one county in the southwestern province of Yunnan where three people had died of rabies, authorities killed 50,000 dogs, many of them beaten to death in front of their owners.

Many people also supported the move, saying it was the only way to contain the disease.