"People started to say my name and they had never heard of Madonna," the 48-year-old singer, talking about her recent visit to Malawi, told AP Television in an interview Tuesday. 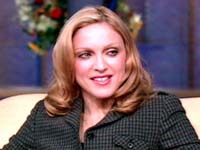 "And, in Chichewa, the word `madonna' means `distinguished white lady,' so I think they got very confused."

Madonna's efforts to adopt a 13-month-old boy, David Banda, have set off a media storm. She and her husband, filmmaker Guy Ritchie, were granted an interim adoption order by Malawi's High Court last month.

The boy has joined her two children daughter Lourdes, 9, and son Rocco, 6 in England. What is it like to have a little one again?

"It's nice," she said. "It's lovely. It's so great to hold him, you know, and he's just starting to walk. And just to see that the whole world being new again and to see the world through his eyes is wonderful."

Madonna has written a new children's book, "Too Good to Be True," and said she wants to direct a movie and has a project in mind. She also has an NBC concert special set to air Nov. 22.

When asked if she would retire to focus on her children full time, a smiling Madonna replied, "No. I love my job."