Indian superstar Amitabh Bachchan is going from good to bad in a remake of the Bollywood blockbuster "Sholay," or "Embers," a newspaper reported Monday. 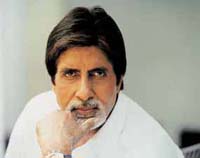 In the 1975 original, Bachchan played a small-time thief who saves a village in northern India from being repeatedly plundered by a gang of bandits led by a gangster known as Gabbar Singh.

This time around he's taking a shot at the baddie role; he reportedly told the Hindustan Times that his modern-day Singh will be "a suave and sharp gangster who gives the police the slip."

The 1975 Singh was a scruffy, unshaven character with tobacco-stained teeth, but Bachchan is confident his stylish take on the gangster will be just as intimidating. He said the character will also sport a scar on his nose and have one blue-gray eye and a brown one, reports AP.

"Looks can be deceptive, more so in the case of this Gabbar. He can be more menacing than you can imagine," the Times quotes Bachchan as saying.

He said he had wanted to play Gabbar Singh in the original a role made famous by actor Amjad Khan, whose threatening dialogues are still well-known across South Asia.