Grammy-winning singer Whitney Houston has filed for divorce from her husband Bobby Brown, her publicist told The Associated Press on Wednesday. 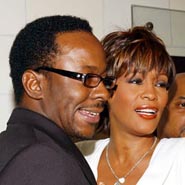 Publicist Nancy Seltzer declined to reveal where or when Houston filed the divorce papers, and said the singer had no statement to make.

"I can just confirm that she has filed for divorce," Seltzer said.

Houston and Brown, who married in 1992, have had a sometimes tumultuous marriage, and rumors of their breakup have surfaced often over the years.

The couple have one child, 13-year-old daughter, Bobbi Kristina.

According to Access Hollywood, what is now a legal separation is a technicality which will become a divorce filing in October.

The source says legal documents were filed Friday and that Bobby Brown was served with those documents yesterday.

In June 2005, Brown launched his own reality series, "Being Bobby Brown," on the Bravo television network.

Whitney made a splash last night at the Beverly Hilton Hotel with a surprise appearance at the "The Society of Singers Presents the 15th Annual Ella Award honoring Johnny Mathis". Flanked by her mentor, Clive Davis, and cousin, Dionne Warwick (who performed at the event), Whitney looked every bit the picture of health and happiness, the likes of which the public hasn't seen from her in quite some time.

The glamorous Whitney was all smiles posing for photographs, laughing arm-in-arm with Davis and Warwick which appeared reminiscent of years past when she was at the top of her game as one of the leading ladies of the music industry.

Mr. Davis told MTV last week that he and Whitney are at work right now on a comeback album, and they've already chosen six songs for the project. Clive had this to say about what fans can expect: "Whitney is Whitney, and there ain't nobody like her. It'll be Whitney. It won't be somebody reaching for a current trend, that's for sure."