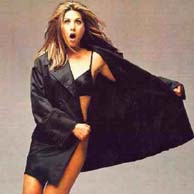 Jennifer Aniston has settled a lawsuit with the photographer who shot topless photos of the actress late last year.

Aniston, 37, sued Peter Brandt in December 2005, claiming he invaded her privacy by using a telephoto lens to photograph her inside her home when she was topless or partly dressed.

She alleged in the lawsuit that Brandt used "invasive, intrusive and unlawful measures" to capture the images. Brandt said he took the photos while standing on a public street about 300 yards (275 meters) away from Aniston's home.

Aniston starred in this summer's "The Break-Up" with Vince Vaughn, reports AP.