Kidman and Urban a bigger thrill than July 4 fireworks display

Newlyweds Nicole Kidman and Keith Urban watched a holiday fireworks display from the rooftop of a popular pool hall, and a lot of gawkers watched them. 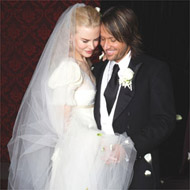 Kidman and Urban a bigger thrill than July 4 fireworks display

Fresh off their whirlwind Australian wedding and honeymoon, the actress and country singer snapped photos of the Fourth of July display from Buffalo Billiards near the riverfront in Nashville.

Before the fireworks, they were in a small room in the back of the billiards club, set off by velvet ropes and a couple of security guards.

But patrons could see into the room.

"Girls and guys alike could be seen text messaging friends and leaving giddy voice mails upon noticing the famous couple," David Yunker, a copy editor for The Tennessean newspaper who was in the pool hall, was quoted as saying in the newspaper.

Urban and Greg Morris, the owner of the billiards club and a longtime friend of the singer, confronted some men taking pictures with long lenses.

"He proceeded to tell them what they thought of their picture taking," Morris said, adding that Urban did not use any profanity or rude language.

Kidman and Urban, both raised in Australia, were wed June 25 in Sydney. They are now living in Nashville, where Urban records, reports AP.